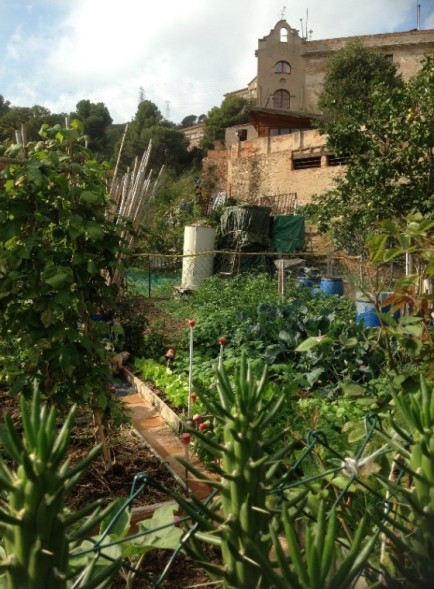 Community Garden at Can Masdeu, October 2016

This is my article that was published in Permaculture Magazine on 30th March 2017 about community gardens in Barcelona.

A 2012 study suggested that Barcelona has more community gardens than any other European city. Five years on, Steve Matthews looks at the current state of play, and finds spaces of protest, participation and learning.

Barcelona’s community gardens tend to be found in the quiet corners and marginal spaces of the city. You find them at the edge of a public square (L’Hortet del Forat), on a disused piece of land where a building has been demolished (L’Hort del Xino) or on the very outskirts of town (Can Masdeu).

No two gardens are the same, but all are run by a community group of one sort or another. Some are ‘occupied’ and others are officially approved. Decision making is participatory, often through the ‘assemblies’ that came to prominence in 2011 as the economic crisis hit and popular unrest saw people take over squares across the Spanish state. It’s not clear exactly how many community gardens there are in the city these days, but people involved estimate that the number is probably around 15, not counting the growing number of allotments that local authorities have made available in recent years.

The city’s community gardens have often been associated with protest. One of the largest community gardens is at Can Masdeu , which was occupied in 2001 and has long associations with social and ecological protest movements. As well as being home to those who live in the building of the former leper colony, Can Masdeu has an extensive community garden, which is organic and collectively managed, with plots for people who live on site and those from the surrounding area.

The protest aspect of Barcelona’s community gardens can be much more locally focused too. Public space, and how it is used, can be a very controversial issue in such a densely-populated, highly politicised city. The  L’Hortet del Forat garden, for example, came about after a long struggle between locals and the City Council about how a space created by the demolition of buildings in the Ribera district should be used. The Council’s plan to create a new car park led to a long struggle, which local people won, about how the space should be used. The space now boasts Barcelona’s only dirt (as opposed to concrete) football pitch in a public square, a children’s playground, a new community centre and a community garden – all managed by local people. 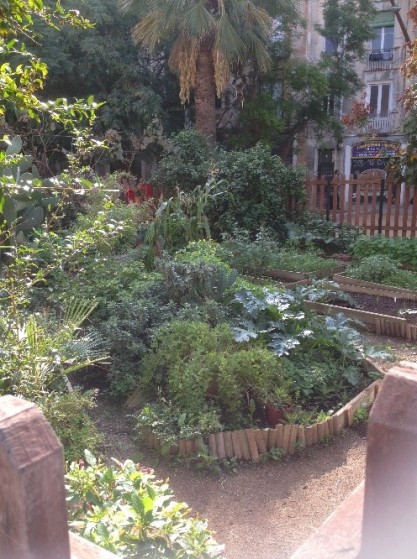 Gardens can also be the focus of smaller scale protests. L’Hort del Xino in the Raval district is on a disused piece of land that was occupied in 2009 by people wanting to create a new community greenspace. There is some food growing there, but it also serves as a place to meet friends and neighbours, surrounded by vegetation and political street art. 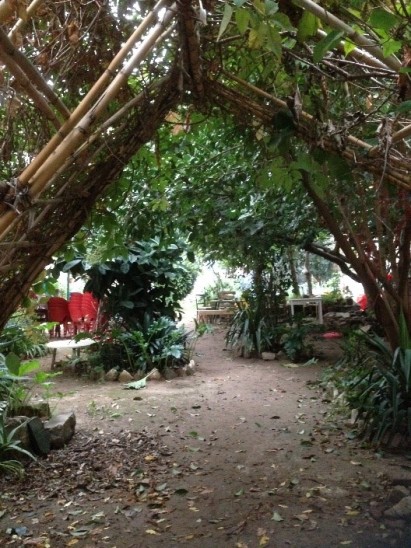 Just round the corner is the Àgora Juan Andrés, a disused site occupied to create a new community space for political and social activities in memory of a man who died in police custody in 2013. There is some basic planting here and the art work is stunning, but a plan to establish a community composting hub had to be abandoned because of problems with rats. 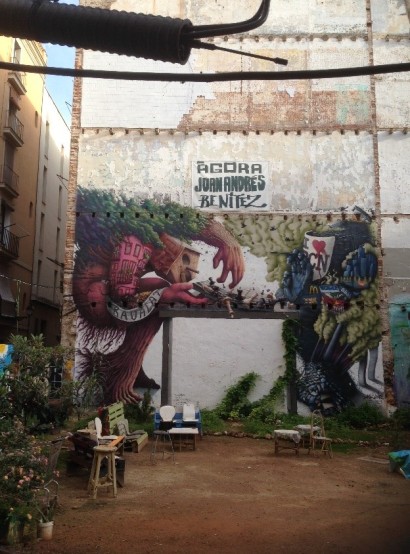 Barcelona City Council has responded to the demand for more green and public spaces through its Plan Buits, an initiative which can allow local groups that meet basic criteria to take over the management of unused sites for community benefit. A number of community gardens have been created through this mechanism since the Plan started in 2012.

Barcelona’s community gardens tend to place a lot of emphasis on participation, with local people being actively involved in decision making. This can take the form of ‘assemblies’ which meet regularly to take decisions and plan activities, but practice has evolved to take account of the limited time that volunteers can commit to projects and the people involved in a given project inevitably change. The group running L’Hortet del Forat, for example, do have regular meetings, but have also found that taking decisions by consensus via WhatsApp and email can be more effective. Recently, there has been a move for the different gardens across the city to work together for more mutual aid and learning, with a first local network meeting held in October 2016.

Participation can also be about getting the local community involved in the space. What is grown at L’Hortet del Forat tends to be used for community meals, where enormous paellas or pasta dishes can be prepared. Just how big these meals are depends on yields, which can be low in such small spaces, but the garden’s record so far is feeding 300 people at an event held as part of the local fiesta. 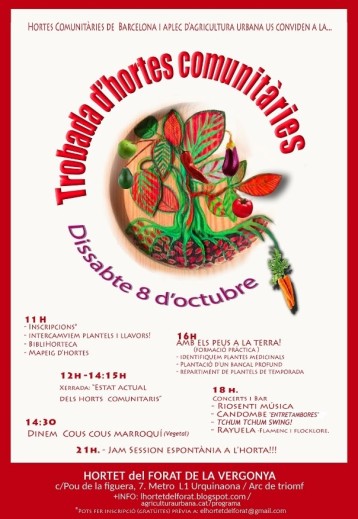 Learning and ‘Little Grains of Sand’

The scope for Barcelona’s community gardens to make a real impact in terms of supplying local food is, of course, limited. The gardens themselves can be quite low profile, hidden away in quiet corners and associated with particular groups or political ideas.  As one local community garden activist put it, ‘This is not Todermorden!’

What the gardens do seem to be doing, though, is raising awareness of ecological and social issues by providing a physical space where people can explore new ideas and ‘get their hands’ dirty, learning experientially alongside others. Issues like traditional local foods, seasonal foods, food sovereignty and environmental awareness can be made real for people who may have spent all their lives in a densely populated urban setting with no access to the land.

And once people start learning through a garden project, it can be the start of a journey of learning and action. Isabel Molina, one of the people involved at L’Hortet del Forat, has seen how such spaces have transformed herself and others: ‘The gardens are places to learn, connect with others and connect with the earth. You do, touch, see, learn how plants grow, find out about political ideas like food sovereignty, how space is used, the importance of defending traditional growing practices and local varieties from Catalonia. The more I got involved, the more interested I got and I joined an agroecological food consumer co-op, did a Permaculture Design Course with Permacultura Barcelona and am now planning to do a Master’s degree in sustainability. The gardens are spaces of transformation – people change, and one thing leads to another.”

There are many practical challenges facing those involved in the gardens. The occupied ones are always liable to eviction. People can struggle to commit the time as they try to secure a livelihood in tough times. Some people leave, others come in. There can be disagreements over aims and specific plans. But, for those involved the gardens provide a space for people to ‘put their little grain of sand’, or take steps which are their small, personal contribution towards the kind of city and world they want to be part of.